New study from Uppsala, Hamilton, Canada, published in Circulation shows that biomarker-based ABC-AF-scores provide more reliable balancing of risk for stroke versus the risk of bleeding in patients with atrial fibrillation with and without treatment with oral anticoagulation.
(Circulation 2021 May 11;143(19):1863-1873)

What Are the Clinical Implications? 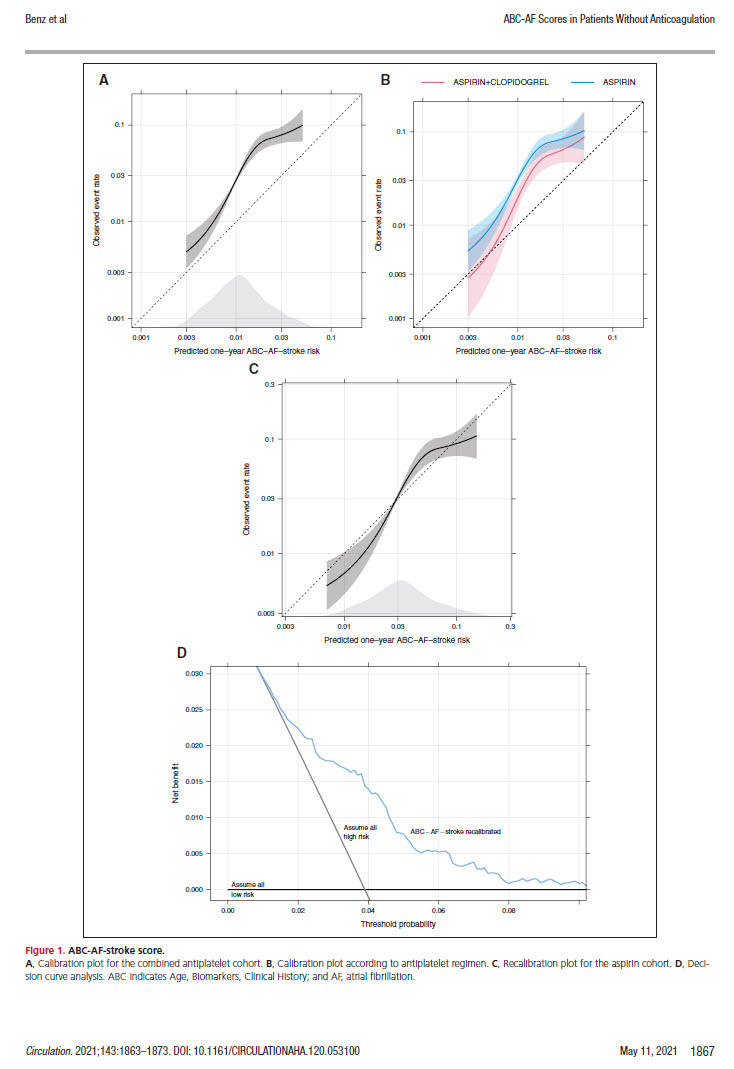 Atrial fibrillation is the most common cardiac arrhythmia that occurs in around 3 % of the population in high income countries. The prevalence increases substantially with increasing age and affects around 10 % of the population above 75 years of age. Atrial fibrillation is associated with an increased risk of stroke and death which can be reduced by oral anticoagulation, although at the cost of an increased risk of bleeding. Therefore, there is a need for individualization of treatment in order to balance the risk of stroke and risk of bleeding. During the last decade drs Ziad Hijazi, Johan Lindbäck, Jonas Oldgren, Agneta Siegbahn and Lars Wallentin and collaborators in Uppsala have shown that circulating biomarkers are more important for the prediction of risk of stroke, death and bleeding than information on clinical factors alone in patients with atrial fibrillation treated with oral anticoagulation.

During the last year the Uppsala investigators have collaborated with a group from Hamilton in Canada to evaluate the biomarker-based ABC-AF-risk scores using data from two clinical trials including patients with atrial fibrillation treated with aspirin (n=3195) or aspirin and clopidogrel (n=1110) and not with oral anticoagulation. The results showed that the ABC-AF-stroke score yielded a c-index of 0.70 (95% CI, 0.67–0.73) in both the cohort of patients only on aspirin and in the cohort of all patients combined. The ABC-AF-bleeding score had a c-index of 0.76 (95% CI, 0.71–0.81) in the aspirin-only and 0.73 (95% CI, 0.69–0.77) in the combined cohort. Both scores were superior to risk scores recommended by current guidelines. The ABC-AF-death score yielded a c-index of 0.78 (95% CI, 0.76–0.80) in both cohorts. Calibrated for patients receiving oral anticoagulation, as expected the ABC-AF-stroke score underestimated, and the ABC-AF- bleeding score overestimated, the risk of events in patients treated with aspirin (or aspirin and clopidogrel). The original scores were recalibrated for prediction of absolute stroke and major bleeding risks in patients receiving these treatments in the absence of oral anticoagulation.

In conclusion, the biomarker-based ABC-AF scores showed better discrimination than traditional risk scores and were recalibrated for precise risk estimation in patients not receiving oral anticoagulation. Therefore, the ABC-AF scores can now provide improved decision support regarding the treatment of patients with AF.

If you want to read the whole article in CIRCULATION, click here

Jonas Oldgren
This email address is being protected from spambots. You need JavaScript enabled to view it.
Executive Director UCR
Professor Coagulation Research at Department of Medical Sciences
Uppsala University