Biological aging linked to the risk of COVID infection. 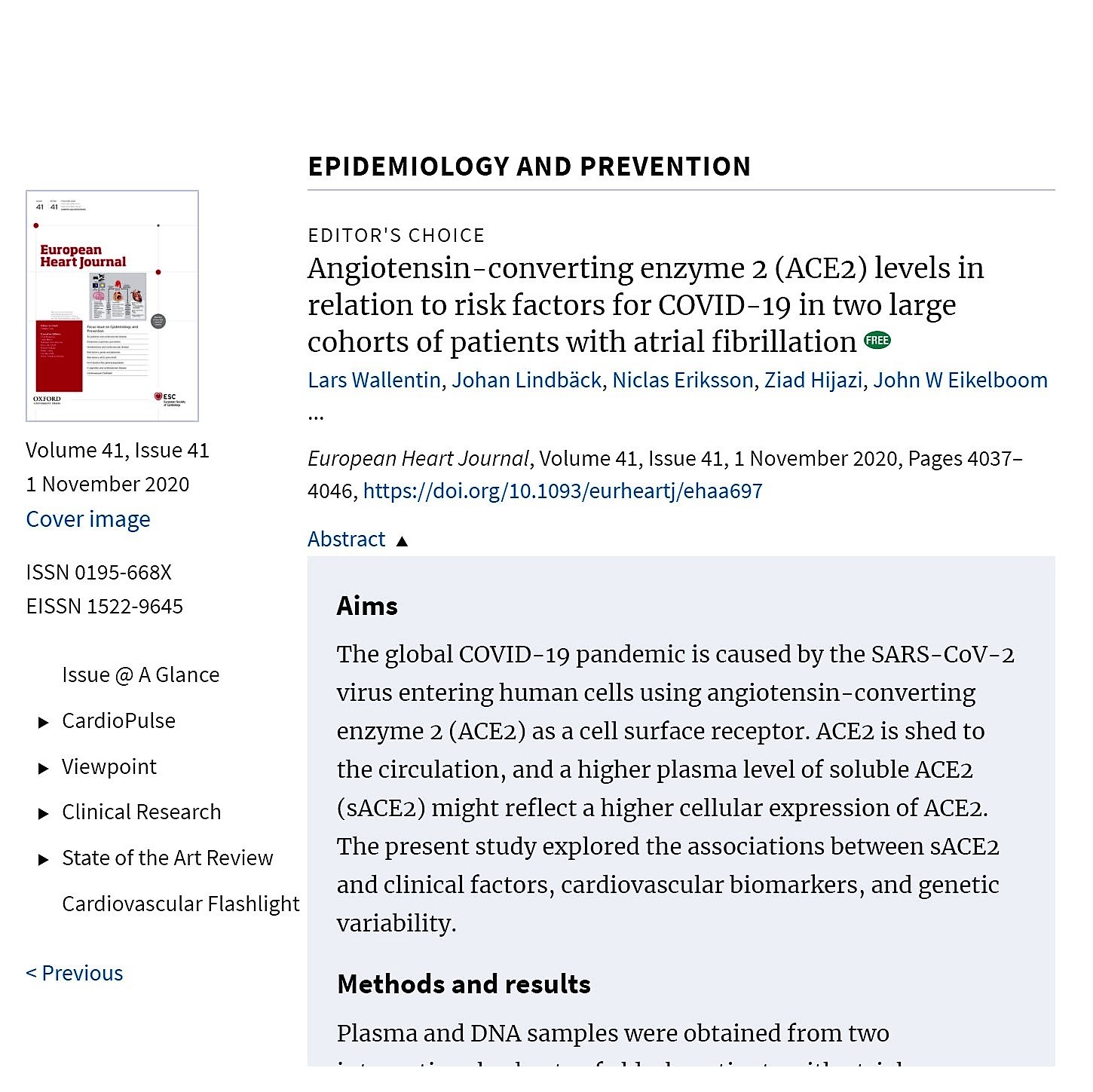 Biological aging linked to the risk of COVID infection.

Why is severe COVID-19 infection most common in the elderly, and more common in men than women in all countries of the world? Lars Wallentin and his local and international research group have shed light on this issue in a scientific project recently published in the European Heart Journal. The coronavirus SARS-CoV-2 binds to the protein ACE2 on the surface of the cells, allowing the virus to enter the cells. ACE2 is a molecule that participates in the regulation of blood pressure and which is also released from the cells and enters the bloodstream. The research team showed that the level of ACE2 in blood plasma, in two groups with a total of 5087 patients with the usual heart rhythm disorder atrial fibrillation, increased with age, male sex, diabetes and other heart diseases. At the same time, they measured another substance in blood plasma, GDF-15, which the group has previously shown to be a good indicator of biological aging and the risk of age-related diseases. It was then found that the level of GDF-15, ie biological aging, and male sex were the factors that were most strongly related to the ACE2 level. The researchers believe that the results suggest that the ACE2 level in blood plasma reflects an increased ACE2 level in the cells and thus entails an increased risk of COVID infection. This is consistent with infection data from all countries affected by the virus, where increasing biological age and male sex are associated with an increased risk of COVID infection. In addition, the results indicate that measurement of GDF-15 levels would be an interesting opportunity to assess the risk of developing severe COVID-19 infection. Lars Wallentin says that "it is very exciting that the reason for differences in COVID-19 infection could be due to aging leading to an increasing number of gateways for the virus and not just to a declining immune system". The current study was published online in the European Heart Journal, September 27, 2020.

The study was based on chemical analyzes of ACE2 and GDF-15 and several other substances in blood plasma from patients who were part of the large international clinical trials of new drugs for stroke (ARISTOTLE and RELY) which were conducted in 2006 - 2011. The blood samples have since the end of the studies been stored in Uppsala Biobank and used in many research projects. The biochemical analyzes were performed at the Uppsala Clinical Research Center's (UCR) laboratory and the Science for Life laboratory in Uppsala. GDF-15 has been measured using a method developed in collaboration with ROCHE Diagnostics. ACE-2 has been determined using a method developed by the Uppsala company OLINK. The statistical analyzes have been carried out by the statistics group at UCR.

If you want to read the whole article in European Journal of medicine, click here.